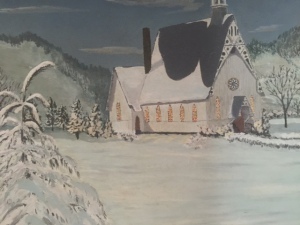 I was flipping around channels on Sirius recently when a song that I’d not heard in ages came on. It was Sin City by the Flying Burrito Brothers. The words really inspired me. I immediately went and bought a notebook.” I’m blogging, I told myself, I’m blogging!” I wanted to say something about the song.

For me, the song invokes bleak imagery of a desolate, downtrodden town. Perhaps it’s a mining town. Certainly, it’s a “company” town. It has the same lonely feel of a beach town in winter.

The theme is that of a person struggling to be good. Try as he may, he repeatedly loses his struggle against sin and finds himself straying. The songwriters, Chris Hillman and Gram Parsons, address the power and inevitability of sin with the lines “This old town’s full of sin, it’ll swallow you in..” and see the only just fate to be  “the Lord’s fiery rain.”

There, you find the struggle.

This isn’t a new theme. Like sin itself, it’s common to man. One of my favorite hymns, Come Thou Fount of Every Blessing, explored that theme long ago. Robert Robinson penned the words, “prone to wander, Lord I feel it. Prone to leave the Lord I love.” It is a theme though that is expressed often  in country music, both in the songs and in the lifestyle.

There was a time when other folks’ struggles were so simple to me. I thought that you could judge the wanderer by the wandering. His sin defined him.

Now, I see it differently. The agonizing over his sin is how I define the man. It’s his desire to return, no matter how unsuccessful it appears in his life, that is the true measure of a person. He’s defined by the grace of God within him that stirs in him the desire to come home.